Al salamu 'alaykum (Peace be upon you!)! I pray you are well and staying warm if you are in one of the places in the U.S. about to be hit with a big winter storm! It is being reported that wind chill alerts are in effect for over half of the U.S. population as a "once-in-a-generation" storm of snow, wind, ice and frigid temperatures are about to hit the country. Ohio is supposed to be flash frozen tonight! Yikes! Everyone stay safe! This week, I want to share an interview and the story behind it, which is particularly meaningful for me because it reminds and teaches me that you never know what can happen when one small act of kindness builds upon another and another until you produce something beautiful, which others can benefit from. So let's start with the ending. Alhamdulillah (all gratitude to God), last night I found out that an interview I did about six months ago was just picked up and published by Muslim Girl Magazine. The story behind it is sweet and interesting. It started when I sent out my weekly email about the launch of Usuli Press and The Prophet's Pulpit. I received a beautiful response from Ifrah, who was so excited about the launch, she immediately reached out. I was so touched. I found out she was a writer among other things, so I offered to send her a copy of The Prophet's Pulpit, hoping she might consider writing a review. She agreed, and then asked if I might consider being interviewed by her for an article, to which I agreed. :) We Zoomed, chatted, she wrote and we edited, and voila, by August, Ifrah had completed the piece and began pitching the interview to various publishing outlets. We had hoped that we could target a more mainstream audience. It felt like a possibility that perhaps in this Islamophobic climate, someone might be open to a different kind of story about a non-traditional Muslim woman convert running a U.S. non-profit education institute focused on Islamic ethics that was calling for an intellectual revolution by launching a new imprint. Sounds kind of interesting, maybe? Unfortunately not. Ifrah sent proposals to twelve different outlets, to which she received either crickets, or no thanks, not interested in that kind of content right now... Not to be deterred, Ifrah kept on going, and exactly six months after our first interview, we were blessed to appear under #EditorsPicks at Muslim Girl Magazine. God made it clear, easy, and straight-forward where we should land, and I believe there is a reason for everything, alhamdulillah. 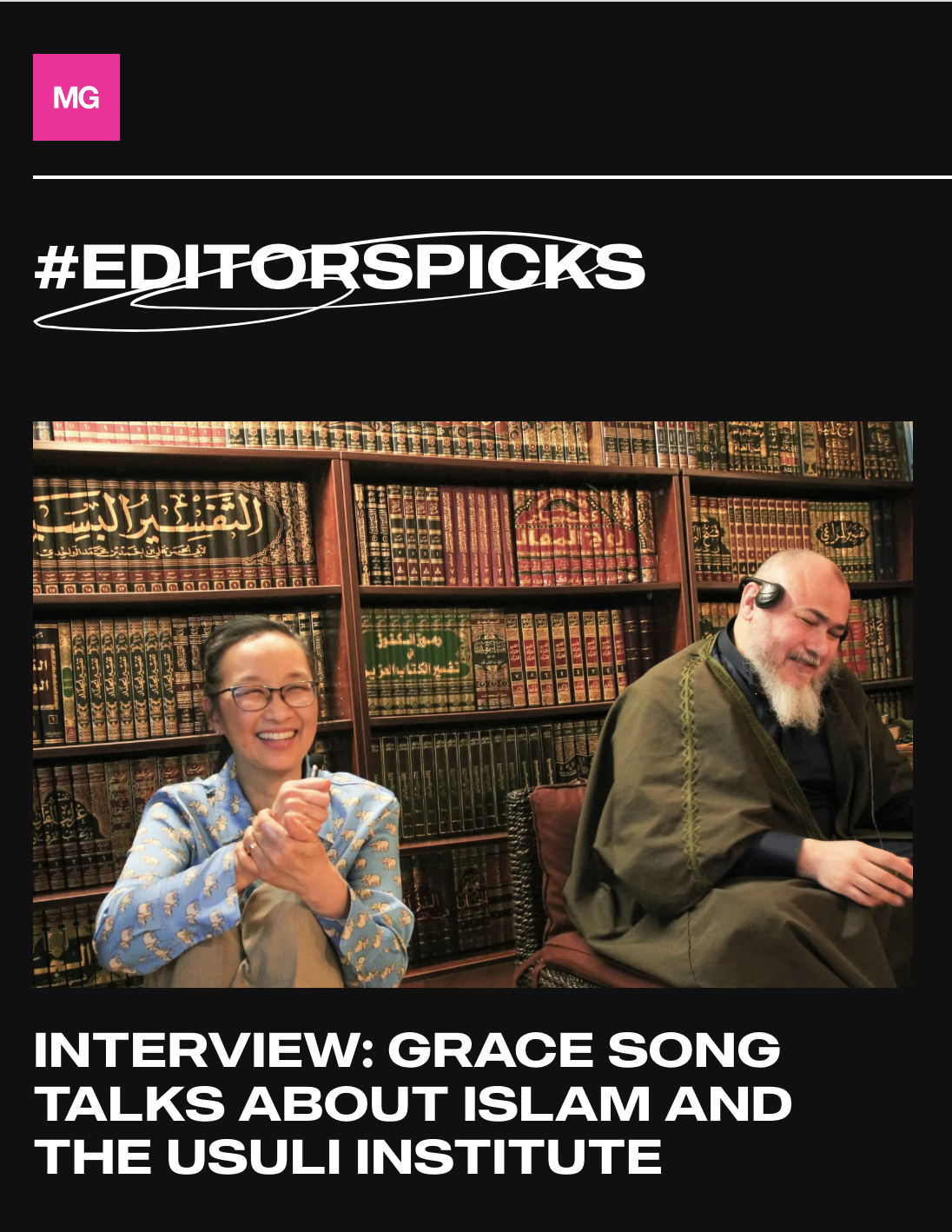 I am really grateful for so many aspects to this experience. First, it often feels that so much of what we do at Usuli is perceived as non-traditional, on the margins, or even radical at times. Perhaps that is to be expected given that my own presence in our education events regularly challenges the status quo. As a non-scarf wearing woman who performs the call to prayer (adhan) every Friday, and who likes to bring puppies to accompany me in my introductions before our Qur'an classes, I don't exactly contribute to what would be considered typical or traditional, to be sure. And I suppose it is by design, because all of that is counter-balanced by our very serious and intense engagement with the Qur'an, coupled with Dr. Abou El Fadl's powerhouse khutbahs every Friday that cover issues, topics, and targets that are not touched in other khutbah spaces. To me, the totality of this is all well within the range of the "Islamic" and the breadth and beauty of the human experience - what I believe should be the totality of the Muslim experience. I think what we do at Usuli is refreshing, human, and liberating, and the messages I receive, like the ones I received from Ifrah, tell me that others agree.

So, I am especially grateful when someone like Ifrah, perhaps on a whim, perhaps on a glimmer of inspiration, or perhaps on a passing moment of insanity (!), decides to pursue an idea and commit to a project that leads to a wonderful conversation and an inspired piece of writing. Then a dedicated effort leads to rejections and ultimately, an acceptance, the one acceptance which allows a non-traditional organization like ours to take the first step into a "mainstream Muslim" publication, something that has not been open to Usuli up until now. I believe that those who know us and our work know that we are not doing what we are doing for anything other than beloved service to God. For me personally, this is my repayment to God for all of what God has gifted me (something I could never come close to repaying) - a non-traditional window to the beauty, humanism, eloquence, and enlightenment of the Islamic message as I have received it through this Usuli education. It is my service to work to facilitate it for others - for anyone who is searching, open, and interested in the same. So, I am especially grateful to Ifrah and to Muslim Girl Magazine for helping to facilitate my service and allowing me the opportunity to share my own reflections about my journey and about the work we are doing at Usuli, for whatever it is worth. May God bless and reward them both.

I love that in her piece, Ifrah frames our interview by first sharing her reflections on her own journey, and what it meant for her to come across Usuli along the way. Here, I share excerpts of her reflections from the article:

On Building a Society of Light

What is the hallmark of a great civilization? Is it the amount of land they own or the number of people that society has? Is it the things they create and share, or is it a society of light where everyone is united by common goals, values, and respect for one another? I asked myself these questions frequently while contemplating my faith in undergraduate religion classes at Rutgers University.

I was born into Islam, meaning that both of my parents practiced the faith, and as an extension of the family, I practiced it, too. My parents always valued an Islamic education for their children, especially since we were growing up with different identities; American, South Asian, and Muslim. While public schools taught American identity, Sunday School aimed to keep us connected with our Islamic roots.

My Sunday School education consisted of basic knowledge of Islamic history, stories of the prophets, learning how to pray, and how to read the Qur’an. This pragmatic approach was challenging for me because I have always been an avid reader and thoroughly inquisitive about finding out the “Why?” behind things and how they are connected. However, when you are taught religion as a cultural custom and as simply a following of rituals and rules, it leaves little room for imagination and intellectual curiosity.

At University, I chose religion as my major in an attempt to remedy this, but even there I found a gross lack of diverse courses in my faith. It wasn’t until I met my husband, a convert to Islam, that I fully accepted how hard it was to find Islamic spaces that engaged in intellectual discussion. Our journey of learning about Islam and what the Qur’an actually says led us to the Usuli Institute. And this was the moment that changed everything; the moment that led me to CHOOSE being a Muslim rather than accepting it as a birthright...

...When I was reading [The Prophet's Pulpit], I felt like a withering plant finally being watered. There were moments when I felt so seen, heard, and understood, that it moved me to tears. This emotional response is due to the Islamic discourses I was exposed to throughout my upbringing. They felt distant and focused on rituals, which led me to feel like I was living a double life: one religious and another secular. There was little connection between Islamic values and modern life which made me feel tethered but groundless. The Prophet’s Pulpit is the bridge that not only connects the sacred with the secular but empowers its readers with the knowledge of how to live a meaningful life.

Discovering Usuli and reading The Prophet’s Pulpit has been such an impactful experience for me, that I reached out to Grace Song to see if she would be interested in an interview. I’m humbled and honored that she obliged..."

From there, Ifrah poses the following questions to me:

To read my answers, go to the article here!

To give you a flavor without giving too much away, here is one full Q&A:

A final question, what message would you give to other Muslims who feel like their faith or community is not valuing their voice or who feel isolated or alone?

GS: It is a difficult time to be Muslim. So many people we meet through Usuli feel isolated and alone – they feel alienated from the mosque and unhappy with the status quo. They are seeking something much better. You are not alone.

Nevertheless, the Islamophobia Industry is real and extremely influential, and research shows that Muslims themselves are more influenced by Islamophobia than anyone else. What that means is that we have to work harder to counter that force at so many levels. As an individual, the most important actions are: 1) to educate yourself; 2) to strengthen your direct relationship with God; and 3) to support the right knowledge, either with your time or money.

At Usuli, we address all three of these points. We teach applied Qur’anic ethics. We begin at the foundations by extracting the moral lessons of the Qur’an and then applying them to current challenges. We stay abreast of what is happening in the world so we can be smart, relevant, and effective. Our values are here.

But I believe that more important than anything else is building your own personal loving relationship with God. Yes, we know intellectually that God is the most powerful, the most loving, the most merciful, compassionate, and forgiving, and that with God you can do anything. But at a personal level, it is harder to believe that God chose to create you; knows you intimately; loves you more than your mother loves you; wants what is best for you and for you to be the best version of yourself; and that God can protect you from anything bad. When you truly believe all of this in your heart and truly seek the path of God, then I believe that that is when you truly find peace (Islam) and know that with God, you are never isolated or alone. To me, that is the true meaning of peace.

From TPP: “For believers, every event that unfolds should be highly personal. How does that event speak to you and your relationship with God? Remember that God knows us as collectivities, as nations and tribes, but also as individuals…” (pg. 220).

I am so excited for today's khutbah and the next Project Illumine halaqa installment of Surah 5: Al Ma'idah, Day 2!! Day 1 was out of this world!! Even though we only covered the first four verses, it was wisdom for several lifetimes! Hope to connect with you online soon insha'Allah (God willing)!

In Peace and Hope,
Grace
tagPlaceholderTags: