The U.S. Government is the Most Influential Imam in World Today

Imagine the following scenario. Imagine that you have a neighbor that, through history and practice, through everything that this neighbor says and does, consistently communicates to you that they find you deeply offensive. They find much of what you do so deeply offensive that it is not an exaggeration to say that the message communicated by this neighbor is that your mere existence is offensive to them. And it is evident, with just a little bit of thought and reflection, that what is deeply offensive to this neighbor is your ethnicity, your racial construction, the racial category that this neighbor places you in. What offends them is the fact that you are Persian, Indo-Pak, or Arab. So many of the objections of your neighbor are geared toward getting you to suppress these elements of difference and distinction. In other words, this neighbor wants you to perform so that you are more like them than you are more like you. Imagine all this. And then imagine that your response to this neighbor is to say, “You know what? Let us create a council in this neighborhood. In this council, I want you to tell me everything that you find offensive about me, and I will work diligently on changing it all.”

Yet, it turns out that this hypothetical is not an absurdity. It is, in fact, what we are persevering through in life. It may be thinly camouflaged, but it is not even that hidden or unclear. I am sure we will all remember an image that is truly one for the history books. When the history of Islam in the 21st century is written, when historians look back, they will identify it as a truly bizarre turning point. Think back to 2017, and you will remember the image of President Trump, the King of Saudi Arabia, and the President of Egypt, all with their hands on a globe. That picture was taken on the occasion of the opening of the Global Center for Combating Extremism, or what is known in Arabic as Markaz al-Etidal. The image is rather stunning: two Muslim dictators with an elected U.S. President who sold himself to the American people by expressing his deep hostility toward Islam and Muslims. Part of what Trump promised and delivered to the American people was a Muslim ban, the net effect of which, even after having been abolished by the administration that followed, is still felt to this very day. Immigration from Muslim countries to the United States has been deeply reduced. The number of Muslims who are able to migrate to the US is nowhere near the levels pre-Muslim ban. Not only that, but under President Trump the entire map of Palestine and Jerusalem was forever affected. It was a complete and thorough betrayal of the Palestinian cause. Under President Trump, Israel solidified its ties to the government of Myanmar, and the government of Myanmar was ensured that it will escape all accountability for the genocide it committed against the Rohingya Muslims. After Trump was elected, China launched its genocide against Muslims. The records have since come out that China asked the Trump administration whether it had any objections to a genocide against Muslims, and the Trump administration gave every indication that it had no objections. After the election of Donald Trump, the Islamophobic Hindu nationalist movement was further empowered, and the persecution of Muslims in India reached new unparalleled heights.

Donald Trump, with his thoroughly Islamophobic agenda, is the same president that is standing next to two Muslim dictators. They each have their hands on a globe opening up the Global Center for Combating Extremism. Why am I going back to this moment from 2017? It is because of what has since come out in testimony before Congress as members of the American government are testifying before Congress about this global center.

So, you empowered your racist neighbor to tell you how you should manage your life, how you should perform your identity, and how you should perform your self-determination. It turned out that this center was no small thing. This center inaugurated throwing Muslim scholars in prisons. It also inaugurated a new chapter in dealing with internet companies, so that a Muslim YouTuber who made a video defending the legacy of Yusuf al-Qaradawi was informed by YouTube that they have posted “dangerous content” and that their video is under investigation. We can trace all the threads going back to that critical May of 2017.

Recently, a Saudi court sentenced three Saudi citizens to death. Why? Because they resisted evacuation orders. These are three members of the al-Huwaiti family. The Saudi government told them to evacuate their homes because the government was confiscating their homes to build the Neom project. The Neom project is part of Donald Trump's plan for a new Middle East. In this new Middle East, Palestinians get little strips of territory across the Egyptian border. The Palestinian state would consist of a disjointed and broken up West Bank, a West Bank carved into little pieces by Israeli settlements and checkpoints. They get Gaza and two other little blips of land in the desert along the Egyptian border. 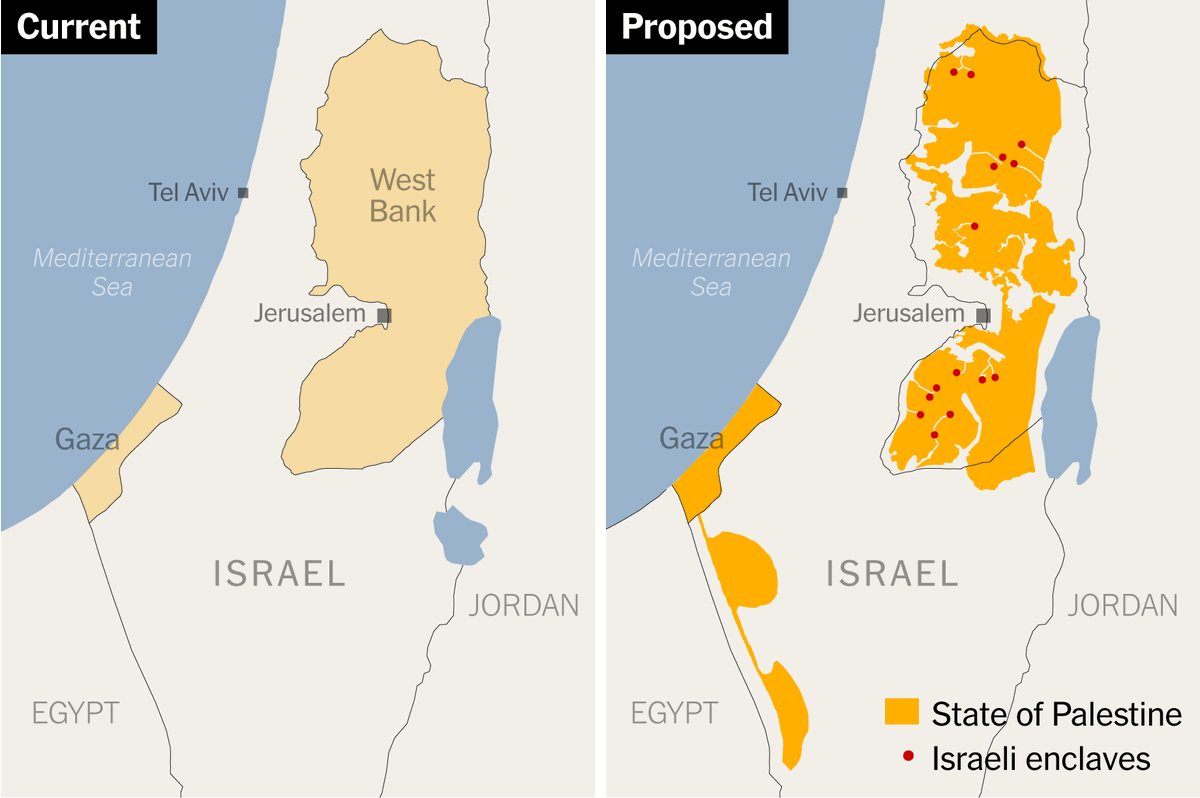 This would become the Palestinian state: a non-viable state, a state born dead, a state without resources. Their economy would be created for them by the Saudis and Egyptians, and thoroughly controlled by the Israelis. That is how we resolve the Palestinian issue. Part of this plan is to create a city called Neom, which is supposed to bring jobs so that Palestinians can work—instead of having a cause, an identity, a religion, or a land. For the mere resistance of saying “No” when being told to evacuate, three Saudis have been sentenced to death.

The absurdities compound. Not just unjust death sentences. Not just human rights violations committed by Israel. But the absurdity in which we live is that Egypt is today hosting a major conference about environmental issues. Article after article is coming out about all the species that are going extinct. What does this center have to say? The center says that if any Islamist or Islamist group, including scholars, shaykhs, and journalists, speak about the environment or condemn what is being done to the environment, then that is “political Islam.” That is extremism. They should be targeted by the security forces and promptly neutralized.

Here is why I focused on this for this khutbah. Saudi Arabia has decided to cut oil production. In doing so, they are pushing the world toward a recession. Why? It is to affect the results of U.S. elections. Saudi Arabia does not want someone who is a lesser Islamophobe in office. They want a racist Islamophobe in power once again. That is a person they can work with. That is a person they are comfortable with, someone who does not give them heat about killing Khashoggi or executing three people because they are opposed to something. Someone who does not give them any degree of heat about the massacre they are committing in Yemen.

The Democrats realize this. They are fully aware of what Saudi Arabia has done to affect the results of the U.S. elections to help a particular faction within the Republican party, the same faction that supported Trump and created the Center. I nearly fell off my chair in laughter when my sources told me that if Muslim journalists, scholars, academics, or activists say anything critical about Saudi Arabia’s cutting of oil production and forcing the price of oil up — if they condemn this act and admit that it was done to affect the results of U.S. elections as an act to favor Islamophobes and racists — then they are told that that is “political” and “extremist” Islam. Instructions have been given to the clergy in Saudi Arabia, Egypt, and the UAE to warn people that their only attitude as a Muslim is one of blind obedience. “Yes, sir.” Do not even dare to have an opinion.

When will my Muslim brothers and sisters start to show signs of life, some level of intellectual activity, something that shows that they have some level of comprehension of the world in which they live? How can a group of open, documented, and certified racist Islamophobes create a center that tells us how we should think, practice, and feel about our religion? How many Muslims bothered to listen to the testimony before Congress about this center? How many Muslims bother to follow what this center says so that they know that when they go to Islamic conferences or attend an Islamic school in the U.S., the curriculum that they study, the hadiths they learn, have been determined for them by the very people who hate us, by the very people who think we are inferior just because we are Muslim?

Previously, I told you that I believe that it is a clear constitutional violation for the United States to open a television channel in the Arab world, Al Hurra, and for this channel to hire spokespeople who do nothing but talk about the “correct” type of Islam, like Ibrahim Eissa. They will not hire anyone that touches Christianity or Judaism. So there is no discourse of comparative religion. It is only focused on the engineering of Islam. Sadly, the current Supreme Court will look at U.S. involvement with something like the Global Center and the fact that the Global Center clearly engineers a religion without concern. The U.S. government is the most influential imam in the world today. It is far more influential than the Shaykh of al-Azhar. It is, in fact, far more influential than any Caliph in any period of Islamic history. The current constitutional jurisprudence in the U.S. will consider this a political question, however, and so no executive privilege will touch it.

The type of Islam often found on social media and that is engineered and handed over to us is not happenstance. Every time we decide not to use our critical faculties, not to become an intelligent, analytical, critical, and self-conscious Muslim; every time we decide not to resist the racism of Islamophobia; every time the wealthy among us decide to put their money toward a dumb and naive Islam, then we are complicit. The Global Center for Combating Extremism loves those of us who are like this.

Notice that it is called the Global Center for Combating Extremism, but it talks only about one type of extremism—Islam. It has nothing to say about the Jewish extremism that continues to gobble up Palestinian lands. It has nothing to say about the Christian extremism that sponsors White supremacist and nativist movements all over Europe and the U.S. They are focused on only one target. That center, whether you believe it or not, loves Adnan Ibrahim, Hamza Yusuf, and Bin Bayyah. That is the type Muslim they want. And they hate any Muslim with a scent of dignity or critical insight.

Do I need to tell you that God warns us in Surah al-Baqarah about those who smile at you and swear wholeheartedly that they have nothing against you but who are, in fact, the worst of enemies (Q 2:204)? Do I need to remind you that God tells us in Surah al-Baqarah that they spread corruption on earth, and when you tell them to stop corrupting, they say to you, “We are nothing but good doers. We are not corruptors”? (Q 2:11).