More On Dogs! and Blasphemy in the Islamic Tradition!

Al salamu alaykum! I pray you are well! Thank you to everyone who sent kind messages of love this past week for my beloved Oso, the husky! I am happy to report that Oso is still with us and very much appreciates everyone's prayers. After Surah Maryam, I started to use the term "Maryam" to refer to the strong and empowered women in my life. Now, after seeing the patience, persistence, and determination of Oso as he continues to live life long past his "expectancy," I am going to turn the name "Oso" into a verb to describe the act of hanging on and exceeding expectations! "Let's Oso that project!" or "Don't give up! Do an Oso!" or "I need to give it my full Oso!" You get the picture. :) You may or may not know that Dr. Abou El Fadl and I have rescued over 50+ dogs over the course of our 27 year marriage. Every dog has a story. Here's a little more about Oso's story. We rescued Oso in 2013 from an animal shelter in Los Angeles. We were told that Oso's previous owner, an older gentleman, had fallen ill and could no longer take care of Oso. The owner's son turned him into the animal shelter, and we found him shortly thereafter. You never know a dog's true story. From Oso's condition when we met him, it was clear that he had been neglected for some time. He was covered in fleas and ticks and had a cancerous growth on his rear end. Thankfully, part of adopting him was removing all of these painful conditions and getting him back to normal. I still remember seeing Oso for the very first time - he was one of the first dogs we saw as we entered the shelter. We were surprised to see a purebred husky in the shelter - at that time, an unusual sight. Most dogs we had been seeing were mutts or Pit Bulls or seniors - dogs that were largely less attractive and less likely to be adoptable. We had noticed that as the general economic situation began to decline, one indicator was the types of dogs that appeared at the shelter -- more and more purebreds were getting dumped. Oso took one look at me and started howling, "Get me out of here!!" We looked at him and fell in love immediately. We told him not to worry that we would get him out. He was incredibly sweet and gentle from the beginning. There is something special about rescue dogs - they know they have been rescued. You see it in their behavior and attitude. It is hard to describe. Even if they have been traumatized, after they settle down and feel safe, they know they have been saved and you can tell they are very grateful. All of this reminds me of where our dog journey began. I have always been a dog lover from childhood. I was the kid that had a book of dog breeds and memorized all the breeds by name. When Dr. Abou El Fadl and I got married, our first dog was a Corgi named Tuta. Shortly after that, our rescue adventures began in earnest. When I converted, I did not know that Muslims had issues with dogs - I could not have imagined that Muslims would have problems loving and honoring God's creation - Man's Best Friend no less! Thankfully, Dr. Abou El Fadl had already done the research about dogs and had arrived at a very different conclusion. He talks about this in an old article I thought I would share that came out shortly after 9/11 in the Los Angeles Times called, "Battling Islamic Puritans." This picture was featured in the article as well. :) "...His home is dominated by two elements that symbolize much about Islam’s ideological tensions today: dogs and books.

Abou El Fadl loves to use dogs to illustrate what he regards as the puritans’ willful ignorance of Islamic tradition and an oppressive emphasis on law over morality.

In much of the Muslim world, dogs are decidedly not man’s best friend. Abou El Fadl says he was taught that they were impure and that black dogs in particular were evil.

Religious traditions hold that if a dog--or woman--passes in front of you as you prepare to pray, it pollutes your purity and negates your prayer. Dogs are permissible as watchdogs or for other utilitarian purposes, but not simply for companionship. Abou El Fadl says this zealous adherence to doctrine led one religious authority to advise a Muslim that his pet dog was evil and should be driven away by cutting off its food and water.

Many Muslims say this caution toward dogs is fundamentally a matter of hygiene. Many devout Muslims follow such rules without question, for submission to God is Islam’s highest call whether the reasons for divine law are apparent or not, according to Sheik Tajuddin B. Shuaib of the King Fahd Mosque.

But Abou El Fadl prides himself on questioning just about everything. He could not fathom a God who would condemn such loving, loyal creatures. So about five years ago he set out to investigate.

After a lengthy process of textual research and prayer for divine guidance, he concluded that reports against dogs were passed on through questionable chains of transmissions, or contradicted by more favorable reports--for instance, one story of Muhammad praying with his dogs playing nearby.

Some reports against dogs bear uncanny similarities to Arab folklore, Abou El Fadl says, leading him to suspect that someone took the tales and attributed them to the prophet.

As Abou El Fadl speaks, Honey snoozes near his side. The yellow cocker spaniel mix was abandoned by its owners and was cowering in the corner of an animal shelter, dirty and racked by seizures, when the scholar and his wife rescued him.

They also rescued Baby, a black shepherd a day away from being killed, and Calbee, an abused dog who smelled of garbage for a year and still feels secure only when curled up inside a plastic laundry basket.

“Dogs represent my rebellion against ignorance about the basis of actual historical law,” Abou El Fadl says. “They are a symbol of the irrationality of our tradition, the privileging of law over humaneness.”

How, he asks, pointing to Honey, who constantly follows him and nestles at his side, does God “create animals with these natural tendencies and then condemn them as thoroughly reprehensible?”...

***** Here is what we know of Bobo's and Honey's stories: Bobo (left) was found by my co-worker in Los Angeles. Bobo had been dumped at a shopping center and was found waiting patiently and loyally for his owner who never returned. My co-worker picked up Bobo and fell in love with him but could not keep him because she lived in an apartment that would not allow dogs. Of course, we could not say no! Bobo was one of the most special dogs we have ever rescued. Shaykh spotted Honey at the animal shelter in Los Angeles and she melted his heart. As the article mentions, Honey was traumatized and shaking in fear when he saw her at the shelter. We would come to discover that she was prone to seizures, which might be why she was dumped. Honey was very close to Shaykh and was generally not happy unless Shaykh was somewhere in her line of sight. Both Bobo and Honey were dear family members for many years until they returned to God. For more of Dr. Abou El Fadl's writings and views on dogs in the Islamic tradition: https://www.searchforbeauty.org/explore/dogs-in-islam/ May dogs become the symbol for rebellion against ignorance for Muslims in our day and age! Wouldn't it be amazing if Muslims became known as the ones who are crazy about loving and being kind to dogs? That would probably be one of the most effective weapons to counter Islamophobia! May Allah help us make it so! :) WEBINAR ON BLASPHEMY LAWS IN ISLAM - SATURDAY, SEPTEMBER 24TH AT NOON ET Dr. Abou El Fadl will be speaking on a panel on the question of: Why do many Muslim countries have blasphemy laws? Join us on Sept 24, Sat @ Noon (ET). 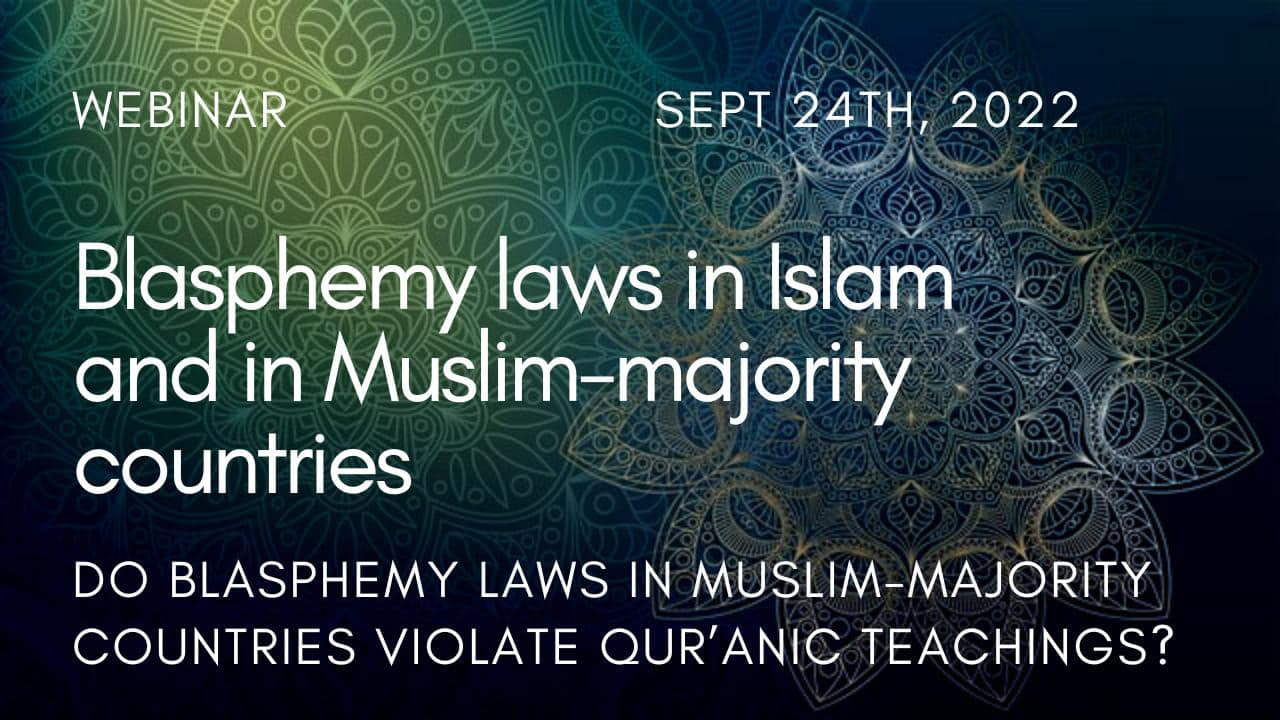 Other speakers: Mustafa Akyol, Ahmet Kuru, Radwan Masmoudi, and Basheer Ahmed. Moderated by Professor Sahar Aziz. Hosted by the Center for the Study of Islam & Democracy & SMU Dedman College To Register for the Webinar: http://bit.ly/blasphem

THE "SHARE WITH A FRIEND" CAMPAIGN!! The best antidote to Islamophobia is a powerful education, and we are extremely blessed to have a very generous donor come forward to aid us in our mission. This donor was so moved by our new book, The Prophet's Pulpit: Commentaries on the State of Islam, that he has made it his cause to get a copy in the hands of every Muslim who is committed to beauty and justice in Islam. 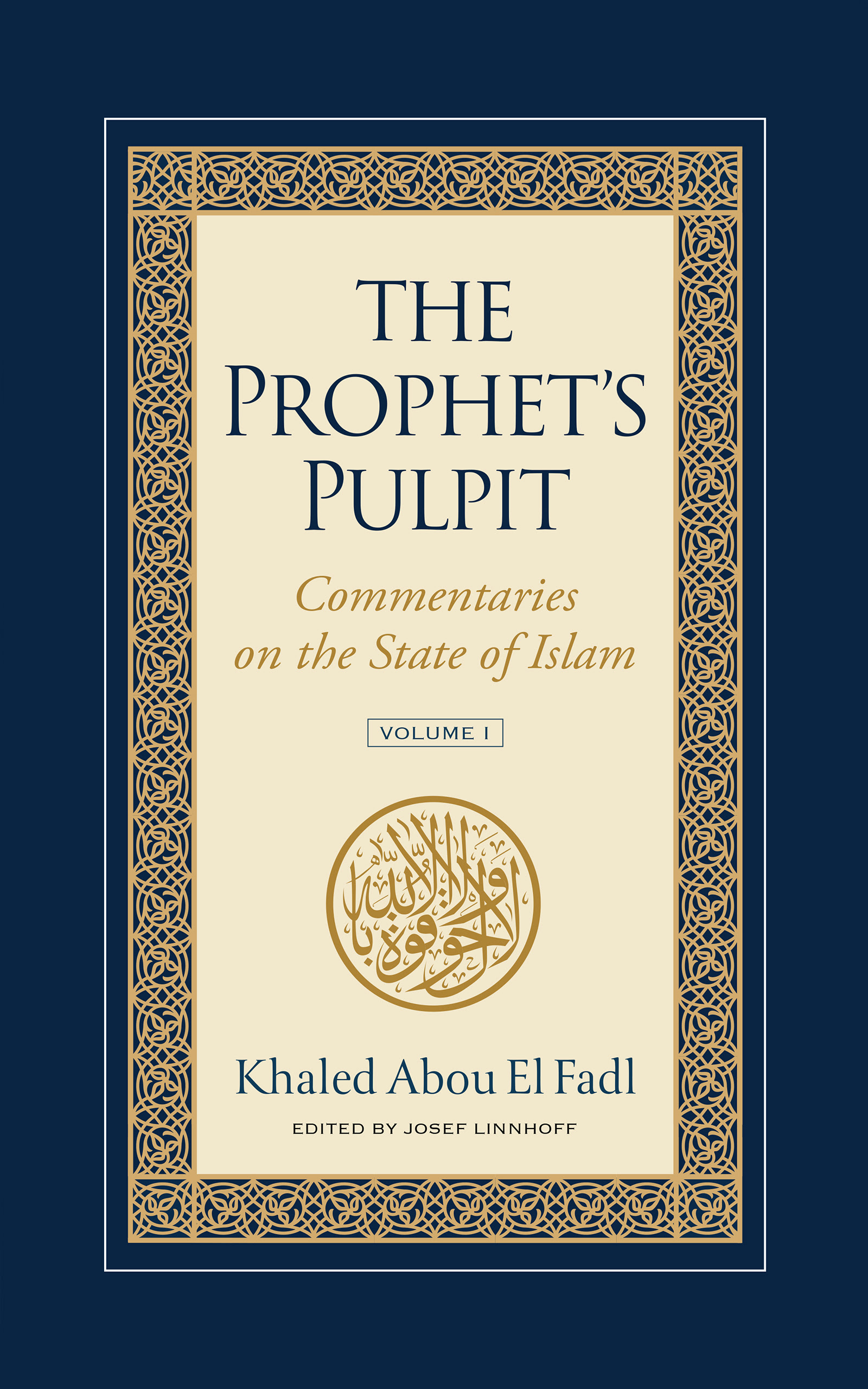 So, we are pleased to launch our "Share With A Friend" campaign! It is easy - if you have a friend who you feel will benefit from this book, send me their name, mailing address and email, and we will send them a free copy with this lovely welcome and introduction card:

And as a thank you for helping us with this campaign, we will be happy to send you your choice of an Usuli T-shirt, Usuli Mug or an eBook version of The Prophet's Pulpit (or a paperback if you don't already have one!). That's it! :) 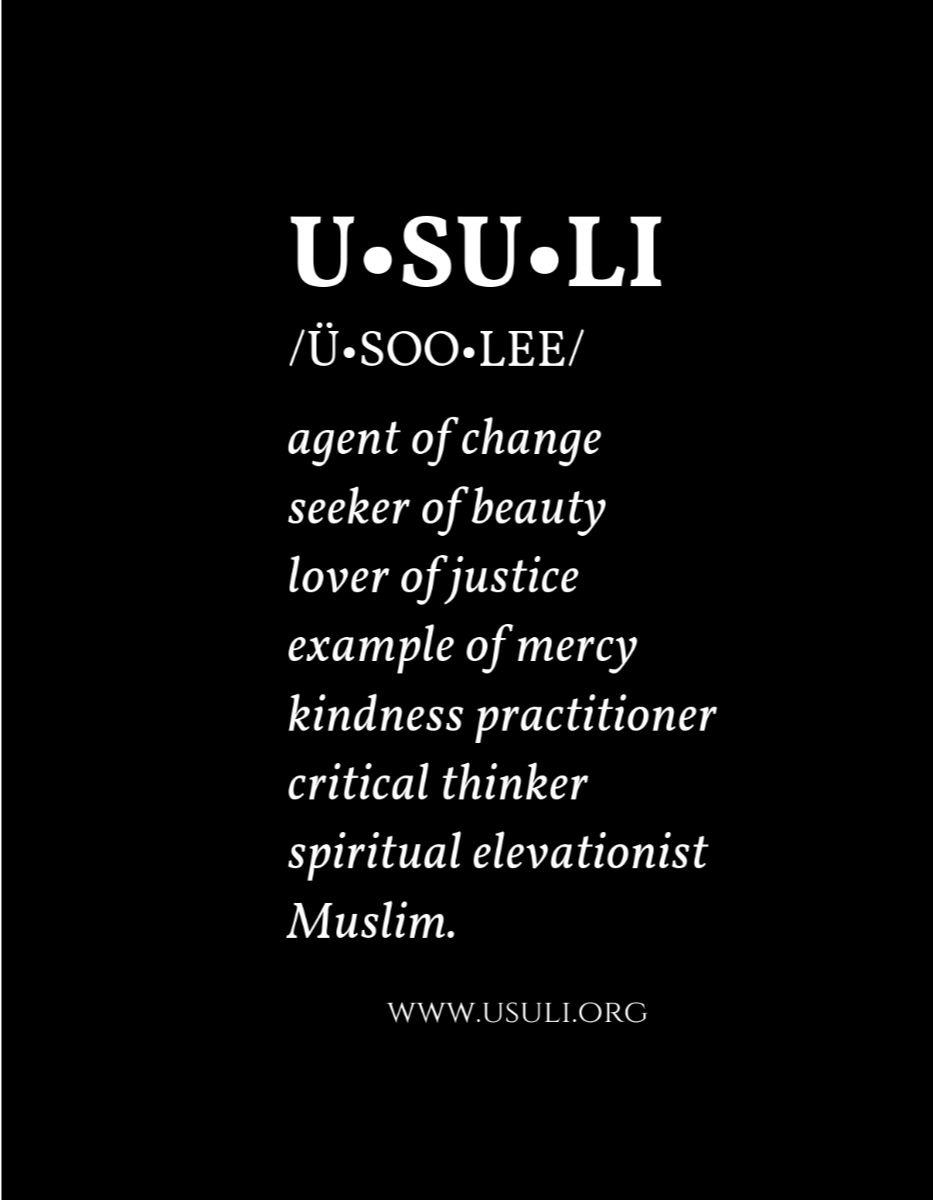 I believe we are all connected and perhaps one or two degrees of separation from every thinking Muslim that can make a difference. Help us get The Prophet's Pulpit in everyone's hands and elevate our collective knowledge and empowerment! Feel free to write me if you have any questions, thoughts or suggestions.  Also, if you know Muslim journalists, academics, activists, politicians or influencers that would benefit, definitely let me know so we can send them a copy as well! May God bless our collective efforts! ***** Looking forward to today's khutbah and tomorrow's halaqa! **Please send me your questions for Surah Al Mumtahana!** Depending on the state of the overwhelming demands upon Shaykh, we may hold a short Q&A-only halaqa tomorrow and save the new surah for next week. May Allah guide us to the best way always! Hope to connect with you online soon insha'Allah (God willing)! In Peace and Hope, Grace